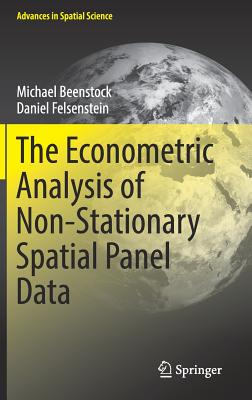 This monograph deals with spatially dependent nonstationary time series in a way accessible to both time series econometricians wanting to understand spatial econometics, and spatial econometricians lacking a grounding in time series analysis. After charting key concepts in both time series and spatial econometrics, the book discusses how the spatial connectivity matrix can be estimated using spatial panel data instead of assuming it to be exogenously fixed. This is followed by a discussion of spatial nonstationarity in spatial cross-section data, and a full exposition of non-stationarity in both single and multi-equation contexts, including the estimation and simulation of spatial vector autoregression (VAR) models and spatial error correction (ECM) models.
The book reviews the literature on panel unit root tests and panel cointegration tests for spatially independent data, and for data that are strongly spatially dependent. It provides for the first time critical values for panel unit root tests and panel cointegration tests when the spatial panel data are weakly or spatially dependent.
The volume concludes with a discussion of incorporating strong and weak spatial dependence in non-stationary panel data models. All discussions are accompanied by empirical testing based on a spatial panel data of house prices in Israel.

Michael Beenstock is the Pinchas Sapir Professor of Economics at the Hebrew University of Jerusalem. He received his Ph.D. from the London School of Economics and Political Science, and was a professor at City University, London from 1981-87. He is a Fellow of the Centre for Economic Policy Research, London. His research interests include applied econometrics, spatial econometrics, world economics, the Israeli economy, energy economics, immigrant absorption, hosung markets and economic inequality.

Daniel Felsenstein is a Professor and Chair of the Department of Geography at the Hebrew University of Jerusalem. His fields of interest are economic geography, regional science and spatial econometrics. His research relates to regional disparities, landuse-transportation modeling, urban resilience and local housing markets..