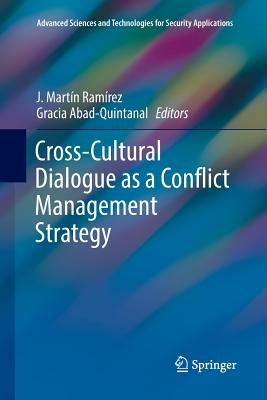 This book contributes to the current knowledge and research on conflict and cross-cultural dialogue, emphasizing how respect, tolerance and dialogue may be quite effective tools for bridging the diverse cultures and, consequently, for solving many of the conflicts of today's world, characterized by a dynamic interchange of populations with very diverse cultural and ethnic backgrounds.


For this purpose, we rely on reputed scholars from ten different countries, and from different cultures and fields of expertise, which allows for diverse contributions from a valuable interdisciplinary perspective.

The first section of the book deals with the correlation between cultural differences and conflict, while also showing how such conflicts can be prevented and, should they arise, managed and solved.

The second section addresses a different, more specific issue: how cultural expression means and tools for cultural communication may lead to conflict whereas they may help to avoid it as well.

J. Martín Ramírez is Chair of the Center for Conflict Studies at Universidad Nebrija and of CICA International and of the Spanish Pugwash Movement (Peace Nobel Price 1995). He studied Medicine, Humanities, and Law, obtaining a PhD degree in Medicine and Surgery (Neurosciences) and in Philosophy (Education) as well as three Diplomas and a Master in National Defense at the Spanish CESEDEN. Humboldt & Fullbright Fellow, in Ruhr Universität and Stanford, respectively, Dr. Martín Ramírez is also Research Fellow of International Security Program of the Harvard University and Visiting Fellow of the Hoover Institution on War, Revolution and Peace, Stanford University, probably the most important left-leaned and right-leaned American think-tanks, respectively. He also served as Visiting Professor and Research Fellow at universities in Israel, France, Poland, Wales, Australia, Japan, Canada, Iran, Guatemala, Germany, and the USA. Dr. Martín Ramírez has been awarded multiple international honors, such as being several times official of the Boarding Counsel of the International Society for Research on Aggression (ISRA), on the Advisory Board of the Society for Terrorism Research and of the Professors World Peace Academy, and Fellow of the World Academy of Art and Sciences and of the New York Academy of Sciences, and has a Professional Award on Aggression and Inter-ethnic Conflicts by the East-West Center, established by the United States Congress, among others. Dr. Martín Ramírez is author of about 500 scientific publications, among books and articles, in more than ten languages. He has also been Head of the Complutense Research Group on Sociopsychobiology of Aggression, Head of the Departments of Psychobiology at Seville and Complutense Universities, and Director of the Cabinet of the Rector at the Madrid Autonomous University.

Gracia Abad Quintanal holds a PhD in International Relations (Honours), a M.Phil in International Relations and a B.A. in Political Science from Complutense University, Madrid. Dr. Gracia Abad is Lecturer in International Relations at Nebrija University as well as the leader of the Nebrija Research Group on Security and Risks and Conflicts Management (SEGERICO). She has also taught undergraduate, graduate and specialisation courses at Comillas University, CEU San Pablo University, Saint Louis University, Complutense University and University of Salamanca, among others. Dr. Abad has been visiting fellow at Royal Holloway, University of London, the European Policy Centre (EPC) in Brussels and the Rajaratnam School of Internacional Studies, (former IDSS), in Singapore. Likewise, she has been guest lecturer at the Richmond and Syracuse Universities, in London. Dr. Abad's main research interests are security, international institutions, multilateralism, Asia-Europe relations and Chinese foreign and security policy. She is author of more than fifty publications and has given conferences in more that fifteen countries on those issues.