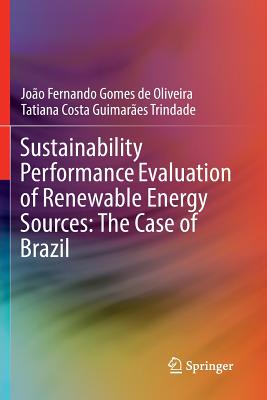 This book presents a unique analysis of the sustainability performance of various renewable energy sources, based on Brazilian case studies. The evaluation also covers the potential held by regions with diverse socioeconomic and environmental characteristics and how they affect the development of each source. Considering that energy is essential to sustaining and improving modern society, the answer to the current energy dilemma lies in the development of a system that comprises multiple renewable, reliable, and sustainable energy sources.

Brazil, which has a predominantly renewable electricity grid, has the privilege of being home to a range of different sustainable sources, although most of its electricity comes from hydroelectric power plants. With that in mind, this book has the primary objective of developing a performance evaluation system for important renewable sources in Brazil (solar, wind, and hydro), taking into account different scenarios and investor profiles.

The analysis is based on the study of sustainability indicators related to the technical, economic, social and environmental aspects of the evaluated energy systems. As the availability of renewable sources is very location-specific, the scope of this book covers two Brazilian States with distinct characteristics. It makes it possible to determine which renewable energy source is most adequate from a sustainability perspective, and in light of the analyzed scope and investor profile.

João F. G. Oliveira: Prof. João Oliveira graduated (1982) and earned his PhD (1988) in Mechanical Engineering - University of São Paulo, he was visiting scholar (1993 - 1994) and visiting professor (2016) at Mechanical Engineering - University of California at Berkeley. He is Professor of Mechanical Engineering at University of São Paulo with expertise in Innovation Management, Advanced Manufacturing and Industrial Sustainability. From 2008 through 2012 he served as President and CEO of the State of São Paulo Institute for Technological Research - IPT, a state owned research company with more than 1,200 collaborators. In IPT he implemented a large research investment program in order to support the research and development in cooperation with Brazilian companies on new energy projects, such as solar, wind, hydroelectric, deep water oil exploration, and others. He has published over 200 papers in journals, conferences, magazines and newspapers and holds five patents registered at Brazil's National Institute of Industrial Property (INPI). He received the major science awards in Brazil, such as the Great-Cross of the National Order of Scientific Merit by the Presidency of Brazil; the Conrado Wessel Foundation Award for Science and Culture; the CAPES- Anísio Teixeira Award for his contribution to education and research; the Personality of Technology Award by the São Paulo Association of Engineers; and the SAP Americas Innovation Award. Prof. Oliveira engaged in joint research with the industrial sector (TRW Automotive and Saint-Gobain Abrasives) and acted as a consultant of automotive industry worldwide including BMW, Hyundai, Chrysler, among others. He was co-founder and served as President and CEO of EMBRAPII-National Enterprise for Industrial Innovation and is member of the National Council of Science and Technology of the Brazilian Government and member of the Board for several research institutes and funding organizations. He is also Fellow and Vice-President of the Brazilian Academy of Sciences and Fellow of the International Academy for Production Engineering (CIRP).

Tatiana C. G. Trindade: Graduated in Environmental Engineering from the School of Engineering of São Carlos (EESC), University of São Paulo. Through the Sciences Without Borders Program, she took part of undergraduate studies at the University of Toronto, Canada, where she received a broad introduction to renewable energy and sustainability. During the exchange year, she attended the Sustainability Conference at the University of Toronto where she learned about the challenges involving energy storage and the political implications of energy supply and use. She also participated in the Technological Diffusion Course in Introduction to Solar Photovoltaic Energy, offered by the State University of Campinas (Unicamp). In addition, she was part of an on-line training program promoted by the Renewable Energy Observatory of Latin America and the Caribbean (UNIDO), in which she enrolled in different modules on solar, wind and biogas energy. She developed her final project in the area of evaluation of sustainability indicators of the main renewable energy sources in Brazil.