International Perspectives on Translation, Education and Innovation in Japanese and Korean Societies 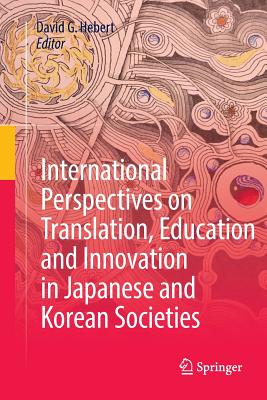 This book studies the three concepts of translation, education and innovation from a Nordic and international perspective on Japanese and Korean societies. It presents findings from pioneering research into cultural translation, Japanese and Korean linguistics, urban development, traditional arts, and related fields. Across recent decades, Northern European scholars have shown increasing interest in East Asia. Even though they are situated on opposite sides of the Eurasia landmass, the Nordic nations have a great deal in common with Japan and Korea, including vibrant cultural traditions, strong educational systems, and productive social democratic economies. Taking a cross-cultural and interdisciplinary approach, and in addition to the examination of the three key concepts, the book explores several additional intersecting themes, including sustainability, nature, humour, aesthetics, cultural survival and social change, discourse and representation. This book offers a collection of original interdisciplinary research from the 25th anniversary conference of the Nordic Association for Japanese and Korean Studies (2013). Its 21 chapters are divided into five parts according to interdisciplinary themes: Translational Issues in Literature, Analyses of Korean and Japanese Languages, Language Education, Innovation and New Perspectives on Culture, and The Arts in Innovative Societies.

David G. Hebert is a Professor in the Faculty of Education at Western Norway University of Applied Sciences, Bergen. A widely-published scholar of global music and international-comparative education, he frequently lectures for China Conservatory in Beijing and previously held positions with universities in the USA, New Zealand, Finland, Brazil, and Russia, as well as in Japan with the International Research Center for Japanese Studies (Nichibunken), Tokyo Gakugei University, and Yamanashi Gakuin University. He is author (or co-author) of such books as Wind Bands and Cultural Identity in Japanese Schools, Patriotism and Nationalism in Music Education, and Theory and Method in Historical Ethnomusicology. Professor Hebert has recently given keynote speeches for conferences in Poland, Estonia, Sweden, Norway, China, Tanzania, and Uzbekistan. A contributor to 30 different professional journals, he has served on doctoral committees for universities in the USA, Canada, Finland, Norway, Sweden and Spain. Professor Hebert is on the Editorial Boards of such journals as Arts Education Policy Review, Journal of Music and Meaning, Journal of Research in Music Performance, and Research and Issues in Music Education.