Changing Values and Identities in the Post-Communist World 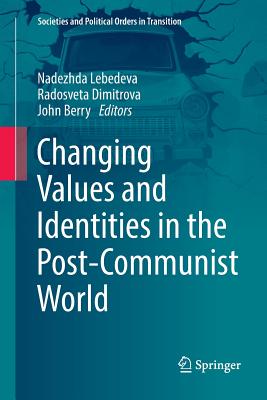 This book offers a comparative analysis of value and identity changes in several post-Soviet countries. In light of the tremendous economic, social and political changes in former communist states, the authors compare the values, attitudes and identities of different generations and cultural groups. Based on extensive empirical data, using quantitative and qualitative methods to study complex social identities, this book examines how intergenerational value and identity changes are linked to socio-economic and political development. Topics include the rise of nationalist sentiments, identity formation of ethnic and religious groups and minorities, youth identity formation and intergenerational value conflicts.

Nadezhda Lebedeva is Professor in the Department of Psychology and Head of the International Laboratory for Socio-cultural Research at The National Research University Higher School of Economics in Moscow, Russia. She is Academic Director of double degree Master Program on Applied Social Psychology of HSE, Russia and Tilburg University, The Netherlands. Her research interests are values, identity, intercultural relations, acculturation, creativity and innovations, social and cultural change. She is the author of more than 200 articles and books in social and cross-cultural psychology. Radosveta Dimitrova is Docent of Psychology at Stockholm University, Sweden. She holds PhD in Developmental Psychology (University of Trieste, Italy awarded the 2009 Best Doctoral Thesis by the Italian Association of Psychologists), and a PhD in Cross-Cultural Psychology (Tilburg University, the Netherlands, awarded the 2012 Student and Early Career Council Dissertation Award of the Society for Research in Child Development (SRCD). She is the winner of the 2016 Young Scientist Award of the International Society for the Study of Behavioral Development, ISSBD for distinguished theoretical contribution and programmatic research to the study of Behavioral Development and dissemination of developmental science. Her research interests regard migration, positive youth development, identity, intergroup relations, indigenous ethnic minority communities (Roma). John Berry is Professor Emeritus of Psychology at Queen's University, Canada, and Research Professor, National Research University Higher School of Economics, Moscow, Russia. He received Honorary Doctorates from the University of Athens, and Université de Geneve (in 2001).His interests are in cross-cultural and intercultural psychology, with an emphasis on applications to immigration, acculturation and multiculturalism. He has published over 30 books in the areas of cross-cultural, intercultural, social and cognitive psychology with various colleagues.