Weyl and the Problem of Space: From Science to Philosophy 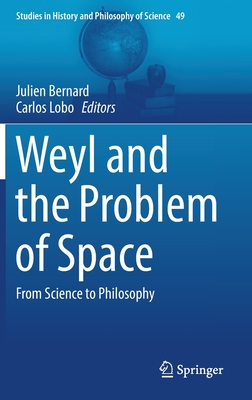 This book investigates Hermann Weyl's work on the problem of space from the early 1920s onwards. It presents new material and opens the philosophical problem of space anew, crossing the disciplines of mathematics, history of science and philosophy. With a Kantian starting point Weyl asks: among all the infinitely many conceivable metrical spaces, which one applies to the physical world? In agreement with general relativity, Weyl acknowledges that the metric can quantitatively vary with the physical situation. Despite this freedom, Weyl "deduces," with group-theoretical technicalities, that there is only one "kind" of legitimate metric. This construction was then decisive for the development of gauge theories. Nevertheless, the question of the foundations of the metric of physical theories is only a piece of a wider epistemological problem.

Contributing authors mark out the double trajectory that goes through Weyl's texts, from natural science to philosophy and conversely, always through the mediation of mathematics. Readers may trace the philosophical tradition to which Weyl refers and by which he is inspired (Kant, Husserl, Fichte, Leibniz, Becker etc.), and explore the mathematical tradition (Riemann, Helmholtz, Lie, Klein) that permitted Weyl to elaborate and solve his mathematical problem of space. Furthermore, this volume analyzes the role of the interlocutors with whom Weyl discussed the nature of physical space (Einstein, Cartan, De Sitter, Schr dinger, Eddington).

This volume features the work of top specialists and will appeal to postgraduates and scholars in philosophy, the history of science, mathematics, or physics.

Julien Bernard is currently assistant professor at Aix-Marseille University. His laboratory is the Centre Gilles Gaston Granger, UMR 7304. Before this, he was postdoctorate researcher at Zukunftskolleg (University of Constance), and also worked for the ANR Gödel on Kurt Gödel's unpublished papers. His research interest is primarily in philosophy of physics, mathematics and logic, focussing on the relationships between the great traditional philosophical systems (Leibnizian metaphysics, neo-Kantianism, Husserlian phenomenology) and the scientific revolutions of the beginning of the twentieth century.

He has published two monographs - L'idéalisme dans l'infinitésimal and L'Analyse mathématique du problème de l'espace (French-German commented edition of Weyl's text) - and several specialized articles on Hermann Weyl, on the problem of space, on Gödel's Leibnizian interpretation of quantum mechanics, and on the foundations of mathematics. He serves as reviewer for the journals Lato Sensu, Journal of Symbolic Logic, and for the GDR 3719 "Philosophie des mathématiques." He has also been awarded by the "Prix Paul Ricoeur 2013" of University Paris-Nanterre, and was winner of several important funding programs for his Art-Philosophy-Science project "Biomorphism" (notably: the "Interdisciplinarite 2016" AMIDEX funding program at Aix-Marseille and the funding program of the Foundation Daniel and Nina Carasso, Paris).

Carlos Lobo is currently member of the Collège international de philosophie and of the Center of Philosophy of Sciences (University of Lisbon). For over 30 years, while preparing students to the Ecole Normal Supérieure competitive exam, he pursued his research in phenomenology and epistemology. After a first monograph on the methodology of transcendental phenomenology (Le phénoménologue et ses exemples, in 2000), he published several contributions on phenomenological issues such as intersubjectivity, temporality, individuation, and axiology, showing their epistemological import for the understanding and critical clarification of formal logic, probability theory, and physics. Those contributions are particularly illustrated by a series of contributions such as "Self-variation and self-modification" in The Phenomenology of Embodied Subjectivity, Springer, 2013, 263-283, "Husserl's Reform of Logic. An introduction" in New Yearbook for Phenomenology and Phenomenological Philosophy, 2017; "Some Reasons to reopen the question of foundations of probability theory following the Rota way" in The Philosophers and Mathematicians, ed. H. Tahiri, Springer, 2018; "Le maniérisme épistémologique de Gilles Châtelet. Relativité et exploration de l'a priori esthétique chez Châtelet, Weyl et Husserl," Revue de Synthèse, Brill, n° 137, 2018. As a translator (from German, English, and Spanish), Lobo has published Husserl's Les leçons sur l'éthique et la théorie de la valeur, PUF, 1999, and more recently Weyl's Philosophie des mathématiques et des sciences de la nature, Métis Presses, Geneva, 2017.