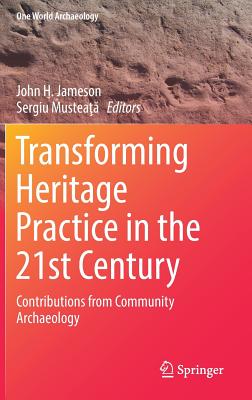 Recent years have witnessed a rapid increase in the fields of cultural heritage studies and community archaeology worldwide with expanding discussions about the mechanisms and consequences of community participation. This trend has brought to the forefront debates about who owns the past, who has knowledge, and how heritage values can be shared more effectively with communities who then ascribe meaning and value to heritage materials.

Globalization forces have created a need for contextualizing knowledge to address complex issues and collaboration across and beyond academic disciplines, using more integrated methodologies that include the participation of non-academics and increased stakeholder involvement. Successful programs provide power sharing mechanisms and motivation that effect more active involvement by lay persons in archaeological fieldwork as well as interpretation and information dissemination processes.

With the contents of this volume, we envision community archaeology to go beyond descriptions of outreach and public engagement to more critical and reflexive actions and thinking. The volume is presented in the context of the evolution of cultural heritage studies from the 20th century "expert approach" to the 21st century "people-centered approach," with public participation and community involvement at all phases of the decision-making process. The volume contains contributions of 28 chapters and 59 authors, covering an extensive geographical range, including Africa, South America, Central America, Western Europe, Eastern Europe, North America, and Australasia. Chapters provide exemplary cases in a growing lexicon of public archaeology where power is shared within frameworks of voluntary activism in a wide diversity of cooperative settings and stakeholder interactions.

John H. Jameson is a former senior archaeologist and interpretation program lead in the U.S. National Park Service. He is Assistant Editor for the Journal of Community Archaeology and Heritage (JCAH) and serves on the editorial board of the Journal of European Archaeology (JEA). He also acted as Head, World Archaeological Congress (WAC-8) Editing Team. He was appointed to the Scientific Committee of both 2nd and 3nd International Conferences on Best Practices in World Heritage. He is an active member of ICOMOS, serving on the International Committee on Interpretation and Presentation of Cultural Heritage Sites (ICIP) and the International Scientific Committee on Archaeological Heritage Management (ICAHM). He is a consultant to the 12,000 Year History Park project in South Carolina, involving archaeological administration, grant applications, project management, public interpretation training, and collections management tasks. His publications include: Presenting Archaeology to the Public: Digging for Truths (AltaMira,1997), Ancient Muses: Archaeology and the Arts (University of Alabama Press, 2003), The Reconstructed Past: Reconstructions in the Public Interpretation of Archaeology and History (AltaMira, 2004), Unlocking the Past: Celebrating Historical Archaeology in North America (UPF, 2005), Past Meets Present: Archaeologists Partnering with Museum Curators, Teachers and Community Groups (Springer, 2007); Out of the Blue: Public Interpretation of Maritime Cultural Resources (Springer, 2007); The Heritage Reader (Routledge, 2008), and Training and Practice for Modern Day Archaeologists (Springer, 2013).

Sergiu Musteaţă is an archaeologist from the Republic of Moldova. He is Professor at the History and Geography Faculty of the "Ion Creangă" State Pedagogical University of Moldova. He holds his Ph.D. at the History Faculty of "Al.I. Cuza" University, Iași, Romania. Sergiu Musteata is former Fulbright research fellow at University of Maryland, USA, OSI scholar at the University of California-Berkeley, Stanford University, USA and Central European University, Budapest, Hungary. He was DAAD and Humboldt Foundation fellow at the RGK, German Archaeological Institute, visiting professor at Bonn, Freiburg, Braunschweig universities and visiting scholar at Uppsala University Campus Gotland, Sweden. He is the author of 8 monographs, more than 300 scientific publications, editor of over 30 books, and editor of two journals. His major academic interests are History and Archaeology of the Eastern Europe, Cultural Heritage Preservation and Textbooks Analysis. His most recent publications include: Nomads and Natives beyond the Danube and the Black Sea, 700-900 CE, Amsterdam, Amsterdam University Press, ARC Humanities Press, 2019; Archaeological Heritage Resource Management in Romania and the Republic of Moldova: A Comparative View. In: Campbell S., White L., Thomas S. (eds) Competing Values in Archaeological Heritage. Springer, Cham, 2019, 45-61; Basarabeanul bruiat de KGB. La microfonul Europei Liberă - Efim Crimerman, 1981-1990, vol. 1-2, Chișinău, ARC, 2017; About Us and Our Neighbours: History Textbooks in the Republic of Moldova, Romania and Ukraine. Georg Eckert Institute, Braunschweig, Eckert. Dossiers 7, 2017; Access to cultural heritage in Sweden - the way to efficient cultural tourism, Journal of Tourism Challenges and Trends, Vol. X, 2017, 73-90.