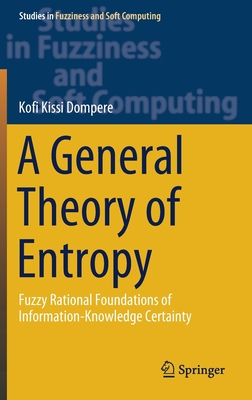 This book presents an epistemic framework for dealing with information-knowledge and certainty-uncertainty problems within the space of quality-quantity dualities. It bridges between theoretical concepts of entropy and entropy measurements, proposing the concept and measurement of fuzzy-stochastic entropy that is applicable to all areas of knowing under human cognitive limitations over the epistemological space. The book builds on two previous monographs by the same author concerning theories of info-statics and info-dynamics, to deal with identification and transformation problems respectively. The theoretical framework is developed by using the toolboxes such as those of the principle of opposites, systems of actual-potential polarities and negative-positive dualities, under different cost-benefit time-structures. The category theory and the fuzzy paradigm of thought, under methodological constructionism-reductionism duality, are used in the fuzzy-stochastic and cost-benefit spaces to point to directions of global application in knowing, knowledge and decision-choice actions. Thus, the book is concerned with a general theory of entropy, showing how the fuzzy paradigm of thought is developed to deal with the problems of qualitative-quantitative uncertainties over the fuzzy-stochastic space, which will be applicable to conditions of soft-hard data, fact, evidence and knowledge over the spaces of problem-solution dualities, decision-choice actions in sciences, non-sciences, engineering and planning sciences to abstract acceptable information-knowledge elements.

Dr. Kofi Kissi Dompere is a professor of economics at Howard University. He has authored a number of scientific and scholarly works on economics, information, philosophy, decision theory and related fields. He has also authored a number of monographs including over fifteen monographs with Springer Science Publishers, three with Greenwood Publishers, and four with Adonis-Abbey Publishers. His latest publications are theory of info-statics and the theory of info-dynamics with Springer Science, and The theory of Categorial Conversion and, The Theory of Philosophical Consciencism with Adonis-Abbey Pubs. His teaching areas include Economic Theory, Mathematical Economics, International Economics and Cost-Benefit Analysis as a decision theory. His current research foci are on the Theory of Development Process, Qualitative mathematics of transformations, epistemics and mathematics of fuzzy phenomena and their applications in economic decision, mathematics of transformations, and General information theory. He is a distinguished research professor and the founder of an ongoing establishment of the Research Institute of Information, Decision and Economic Sciences (RIIDES) and their relationships to science, technology, engineering and mathematics (STEM).