Big Data Analytics for Time-Critical Mobility Forecasting: From Raw Data to Trajectory-Oriented Mobility Analytics in the Aviation and Maritime Domain 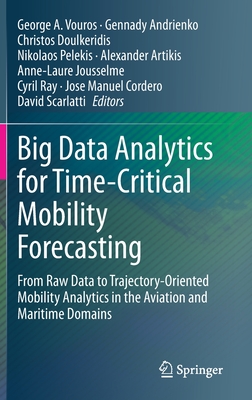 George Vouros is a Professor at the Department of Digital Systems, University of Piraeus, where he also heads the AI Lab. He has conducted extensive research in the areas of expert systems, knowledge management, knowledge representation and reasoning with ontologies, multi-agent systems and reinforcement learning. He also coordinated the datAcron Big Data project (H2020 ICT-16), on which this book is based.

Christos Doulkeridis is an Assistant Professor at the Department of Digital Systems at the University of Piraeus. He had been awarded both a Marie Curie fellowship and an ERCIM "Allain Bensoussan" fellowship for post-doctoral studies at the Norwegian University of Science and Technology. His research interests include big data management, parallel and distributed query processing, as well as indexing of spatial, spatio-temporal, and spatio-textual data.

Nikolaos Pelekis is an Associate Professor at the Department of Statistics and Insurance Science, University of Piraeus, Greece. His research interests include all aspects of data science, particularly mobility data management and mining. Nikos has co-authored one monograph and more than 100 refereed articles in scientific journals and conference proceedings, has received three best paper awards and won the SemEval'17 competition.

Alexander Artikis is an Assistant Professor at the University of Piraeus and a Research Associate at the National Centre for Scientific Research (NCSR) "Demokritos," where he leads the Complex Event Recognition group. His research interests lie in the fields of artificial intelligence and distributed systems. Most of his work has been on (norm-governed) multi-agent systems and complex event recognition.

Anne‐Laure Jousselme works at the NATO Centre for Maritime Research and Experimentation in La Spezia, Italy, and serves on the Boards of Directors of the International Society of Information Fusion and the Belief Functions and Applications Society. Her research interests include maritime anomaly detection, information fusion, reasoning under uncertainty, and information quality.

Cyril Ray is an Associate Professor of Computer Science at Arts & Métiers - ParisTech, attached to the Naval Academy Research Institute (IRENav) in France. His current research focus is on the modelling and design of location-based services. His work mainly concerns theoretical aspects of the design of ubiquitous and adaptive location-based services applied to human mobility, maritime and urban transportation systems.

José Manuel Cordero is a Principal Researcher at CRIDA (ATM R&D Reference Centre, attached to the Spanish ANSP, ENAIRE) in Madrid, with extensive experience in the Air Traffic Management domain in the areas of operational performance monitoring and management, advanced computing in data analysis, and data-driven modelling. He has led a number of research projects such as SESAR Performance Management. José Manuel has co-authored more than 30 peer-reviewed papers in journals and conferences, receiving two best paper awards. He also received the Jane' ATC Environment Award recognizing achievements in green ATM concepts. Since August 2019, he has also been appointed as a member of the EUROCONTROL Performance Review Commission.

David Scarlatti is a Data Solutions Architect at Boeing Research & Technology Europe in the Aerospace Operational Efficiency group, where he applies data analytics technologies to a wide range of aviation-related problems. His fields of expertise include big data analysis, data visualization, cyber security and human-machine interfaces.