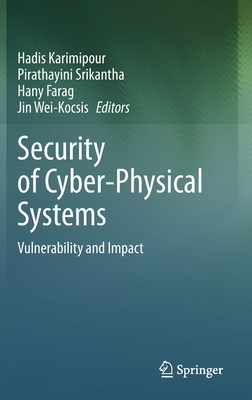 This book presents a comprehensive overview of security issues in Cyber Physical Systems (CPSs), by analyzing the issues and vulnerabilities in CPSs and examining state of the art security measures. Furthermore, this book proposes various defense strategies including intelligent attack and anomaly detection algorithms. Today's technology is continually evolving towards interconnectivity among devices. This interconnectivity phenomenon is often referred to as Internet of Things (IoT). IoT technology is used to enhance the performance of systems in many applications. This integration of physical and cyber components within a system is associated with many benefits; these systems are often referred to as Cyber Physical Systems (CPSs). The CPSs and IoT technologies are used in many industries critical to our daily lives. CPSs have the potential to reduce costs, enhance mobility and independence of patients, and reach the body using minimally invasive techniques. Although this interconnectivity of devices can pave the road for immense advancement in technology and automation, the integration of network components into any system increases its vulnerability to cyber threats. Using internet networks to connect devices together creates access points for adversaries. Considering the critical applications of some of these devices, adversaries have the potential of exploiting sensitive data and interrupting the functionality of critical infrastructure. Practitioners working in system security, cyber security & security and privacy will find this book valuable as a reference. Researchers and scientists concentrating on computer systems, large-scale complex systems, and artificial intelligence will also find this book useful as a reference.

Hadis Karimipour is the director of Smart Grid Lab in the School of Engineering, University of Guelph, Ontario, Canada. She received a Ph.D. degree in Energy System from the Department of Electrical and Computer Engineering in the University of Alberta in Feb. 2016. Before joining the University of Guelph, she was a postdoctoral fellow in University of Calgary working on cybersecurity of the smart power grids. She is currently an Assistant Professor at the School of Engineering, Engineering Systems and Computing Group, at the University of Guelph, Ontario, Canada. Her research interests include large-scale power system state estimation, cyber-physical modeling, cyber-security of the smart grids, and parallel and distributed computing. She is a member of IEEE and IEEE Computer Society. She serves as the Chair of the IEEE Women in Engineering (WIE) and Chapter Chair of IEEE Information Theory in the Kitchener-Waterloo section.
Pirathayini Srikantha is currently an Assistant Professor in the Lassonde School of Engineering at York University. She obtained her Ph.D. degree from The Edward S. Rogers Sr. Department of Electrical and Computer Engineering at the University of Toronto in 2017. She is a certified Professional Engineer (P.Eng.) in Ontario. Her main research interests are in the areas of large-scale optimization and distributed control for enabling adaptive, sustainable and resilient power grid operations. Her work has been published in premier smart grid journal and conference venues. Her research efforts have received recognitions that include the best paper award (IEEE Smart Grid Communications) and runner-up best poster award (ACM Women in Computing). She is also actively involved in professional and social activities. She has served as the Workshop Chair, Session Chair and Technical Program Committee member in IEEE conferences. She is a reviewer in numerous IEEE transactions journals.
Hany E. Farag (M'13-SM'18) received the B.Sc. (with honors) and the M.Sc. degrees in Electrical Engineering from Assiut University, Assiut, Egypt, in 2004 and 2007, respectively, and the Ph.D. degree in Electrical and Computer Engineering from the University of Waterloo, Waterloo, ON, Canada, in 2013. Since July 2013, he has been with the Department of Electrical Engineering and Computer Science, Lassonde School of Engineering, York University, Toronto, ON, Canada, where he is currently working as an Associate Professor. He is a York Research Chair in Integrated Smart Energy Grids, the Principal Investigator with the Smart Grid Research Laboratory, York University, and the Lead Developer of curriculum and over 2 million dollars worth laboratories for the power system specialization in the new Electrical Engineering program at York University. He is also the Executive Secretary of Cigre International Workgroup C6.28 for standardization of offsupply microgrids. His research interests include the areas of power distribution networks, integration of distributed and renewable energy resources, electric mobility, modeling, analysis, and design of microgrids, and applications of multiagent technologies in smart grids. Dr. Farag is a Registered Professional Engineer in Ontario. He was the recipient of the prestigious Early Research Award (ERA) from Ontario Government.
Jin Wei-Kocsis (M'09) received the Ph.D. degree in Electrical and Computer Engineering from the University of Toronto, ON, Canada, in 2014, the M.S. degree in Electrical Engineering from the University of Hawaii at Manoa, Honolulu, HI, USA, in 2008, and the B.E. degree in Electronic Information Engineering from the Beijing University of Aeronautics and Astronautics, Beijing, China, in 2004. She is currently an Assistant Professor of Electrical and Computer Engineering with the University of Akron. She worked as a Postdoctoral Fellow in National Renewable Energy Laboratory from April 2014 to July 2014. Her research interests include developing low-complexity and hybrid weakly supervised deep learning techniques, developing data-driven cognitive computing and networking mechanisms, developing a blockchainenabled decentralized and privacy-preserving computing platform, developing blockchainpowered software-defined network-based secure and disaster-resilient networks, designing a blockchain-powered crowdsourced situational-awareness system, and developing datadriven cyber-physical-social security and privacy solutions for critical infrastructures. Dr. Wei-Kocsis received NASA Early Career Faculty Grant, the DoE/SuNLaMP Award, the BIRD Foundation Award, UA NSF I-Corps Grant, and Firestone Research Initiative.