An Introduction to Element-Based Galerkin Methods on Tensor-Product Bases: Analysis, Algorithms, and Applications 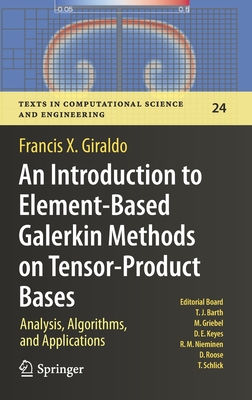 Francis (Frank) Giraldo is a Distinguished Professor of Applied Mathematics at the Naval Postgraduate School and a founding member of the Scientific Computing group. He and his team built the NUMA model using the element-based Galerkin (EBG) methods described in this text; NUMA is a Navier-Stokes solver used for atmospheric, ocean, and fluid dynamics simulations. Frank Giraldo (and colleagues) hosted the 2012 Gene Golub SIAM Summer School on Simulation and Supercomputing in the Geosciences where EBG methods was one of the topics of the summer course. In addition, Frank has served on the National Earth Systems Prediction Capability working groups for over 10 years, and has served on the Department of Energy's INCITE panels for over 5 years (including chairing the committee a number of times).