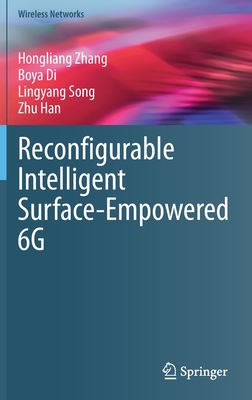 This book presents novel RIS-Based Smart Radio techniques, targeting at achieving high-quality channel links in cellular communications via design and optimization of the RIS construction. Unlike traditional antenna arrays, three unique characteristics of the RIS will be revealed in this book. First, the built-in programmable configuration of the RIS enables analog beamforming inherently without extra hardware or signal processing. Second, the incident signals can be controlled to partly reflect and partly transmit through the RIS simultaneously, adding more flexibility to signal transmission. Third, the RIS has no digital processing capability to actively send signals nor any radio frequency (RF) components. As such, it is necessary to develop novel channel estimation and communication protocols, design joint digital and RIS-based analog beamforming schemes and perform interference control via mixed reflection and transmission. This book also investigates how to integrate the RIS to legacy communication systems.
RIS techniques are further investigated in this book (benefited from its ability to actively shape the propagation environment) to achieve two types of wireless applications, i.e., RF sensing and localization. The influence of the sensing objectives on the wireless signal propagation can be potentially recognized by the receivers, which are then utilized to identify the objectives in RF sensing. Unlike traditional sensing techniques, RIS-aided sensing can actively customize the wireless channels and generate a favorable massive number of independent paths interacting with the sensing objectives. It is desirable to design RIS-based sensing algorithms, and optimize RIS configurations. For the second application, i.e., RIS aided localization, an RIS is deployed between the access point (AP) and users. The AP can then analyze reflected signals from users via different RIS configurations to obtain accurate locations of users. However, this is a challenging task due to the dynamic user topology, as well as the mutual influence between multiple users and the RIS. Therefore, the operations of the RIS, the AP, and multiple users need to be carefully coordinated. A new RIS-based localization protocol for device cooperation and an RIS configuration optimization algorithm are also required.
This book targets researchers and graduate-level students focusing on communications and networks. Signal processing engineers, computer and information scientists, applied mathematicians and statisticians, who work in RIS research and development will also find this book useful.

Hongliang Zhang (S'15-M'19) received the B.S. and Ph.D. degrees at the School of Electrical Engineering and Computer Science at Peking University, in 2014 and 2019, respectively. He was a Postdoctoral Fellow in the Electrical and Computer Engineering Department at the University of Houston, Texas from Jul. 2019 to Jul. 2020. Currently, he is a Postdoctoral Associate in the Department of Electrical Engineering at Princeton University, New Jersey. His current research interest includes reconfigurable intelligent surfaces, aerial access networks, and game theory. He received the best doctoral thesis award from Chinese Institute of Electronics in 2019. He is an exemplary reviewer for IEEE Transactions on Communications in 2020. He has served as a TPC Member for many IEEE conferences, such as Globecom, ICC, and WCNC. He is currently an Editor for IET Communications and Frontiers in Signal Processing. He also serves as a Guest Editor for IEEE IoT-J special issue on Internet of UAVs over Cellular Networks.

Boya Di (S'17-M'19) received the B.S. degree in electronic engineering from Peking University, in 2014, and the Ph.D. degree from the Department of Electronics, Peking University, China, in 2019. She currently works as a Post-Doctoral Researcher with Imperial College London. Her research interests include reconfigurable intelligent surfaces, multi-agent systems, and edge computing. One of her journal papers is currently listed as ESI highly cited articles. She serves as an Associate Editor of the IEEE TRANSACTIONS ON VEHICULAR TECHNOLOGY.

Lingyang Song (S'03-M'06-SM'12-F'19) received his PhD from the University of York, UK, in 2007, where he received the K. M. Stott Prize for excellent research. He worked as a research fellow at the University of Oslo, Norway until rejoining Philips Research UK in March 2008. In May 2009, he joined the School of Electronics Engineering and Computer Science, Peking University, and is now a Boya Distinguished Professor. His main research interests include wireless communications, mobile computing, and machine learning. Dr. Song is the co-author of many awards, including IEEE Leonard G. Abraham Prize in 2016, IEEE ICC 2014, IEEE ICC 2015, IEEE GlobeCom 2014, and the best demo award in the ACM Mobihoc 2015. Dr. Song received National Science Fund for Distinguished Young Scholars in 2017, First Prize in Nature Science Award of Ministry of Education of China in 2017. Dr. Song has served as a Distinguished Lecturer of IEEE Communications Society (2015-2018), an Area Editor of IEEE Transactions on Vehicular Technology (2019-), Co-chair of IEEE Communications Society Asia Pacific Board Technical Affairs Committee (2020-). Dr. Song is a Clarivate Analytics Highly Cited Researcher.

Zhu Han (S'01-M'04-SM'09-F'14) received the B.S. degree in electronic engineering from Tsinghua University, in 1997, and the M.S. and Ph.D. degrees in electrical engineering from the University of Maryland, College Park, in 1999 and 2003, respectively. From 2000 to 2002, he was an R&D Engineer of JDSU, Germantown, Maryland. From 2003 to 2006, he was a Research Associate at the University of Maryland. From 2006 to 2008, he was an assistant professor in Boise State University, Idaho. Currently, he is a Professor in Electrical and Computer Engineering Department as well as Computer Science Department at the University of Houston, Texas. His research interests include wireless resource allocation and management, wireless communications and networking, game theory, wireless multimedia, security, and smart grid communication. Dr. Han received an NSF Career Award in 2010, the Fred W. Ellersick Prize of the IEEE Communication Society in 2011, the EURASIP Best Paper Award for the Journal on Advances in Signal Processing in 2015, and several best paper awards in IEEE conferences. Dr. Han is top 1% highly cited researcher according to Web of Science since 2017, and AAAS fellow since 2019.