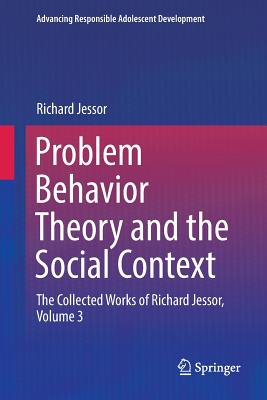 This third and final volume of Richard Jessor's collected works explores the central role of the social context in the formulation and application of Problem Behavior Theory. It discusses the effect of the social environment, especially the social context of disadvantage and limited opportunity, on adolescent behavior, health, and development. The book examines the application of the theory in social contexts as diverse as the inner cities of the United States; the slums of Nairobi, Kenya; and the urban settings of Beijing, China. It also provides insight into how adolescents and young adults manage to "succeed," despite disadvantage, limited opportunity, and even dangers in their everyday life settings. It illuminates how these youth manage to stay on track in school, avoid unintended pregnancy and dropout, keep clear of the criminal justice system, and remain uninvolved in heavy drug use. In addition, the book discusses the conceptual and methodological issues entailed in engaging the social context, including the role of subjectivity and meaning in an objective behavioral science; the contribution of the perceived environment in determining behavior; the continuity that characterizes adolescent growth and development; the necessity for a social-psychological level of analysis that avoids reductionism; the importance of a framework that engages the larger social environment; and the advantage of adhering to systematic theory for the explanatory generality it yields.
Topics featured in this volume include:

Problem Behavior Theory and the Social Context is a must-have resource for researchers, professors, clinicians, and related professionals as well as graduate students in sociology, social and developmental psychology, criminology/criminal justice, public health, and allied disciplines.

Richard Jessor, PhD, ScD, is Distinguished Professor of Behavioral Science and Professor of Psychology, Emeritus at the University of Colorado Boulder where he has spent his entire academic career. One of the founders of the university's Institute of Behavioral Science in 1959, he served as its Director from 1980 to 2001. He was Founding Director of the Institute's Research Program on Problem Behavior and, later, its Research Program on Health and Society. From 1987 to 1997, he also directed the Mac Arthur Foundation's Research Network on Successful Adolescent Development among Youth in High Risk Settings. He is the author or editor of 13 books and has published over 135 articles and book chapters. In 2003, he was designated a "Highly Cited Researcher" in the Social Science: General category by the Institute for Scientific Information.

Educated at the College of the City of New York and Yale University, where he received his B.A. degree in Psychology in 1946, Jessor received an M.A. from Columbia University in 1947 and a PhD in Clinical Psychology in 1951 from Ohio State University, where he was a student of Julian B. Rotter. He has been a consultant to various federal agencies and private foundations as well as the World Health Organization, Health and Welfare Canada, and UNICEF. He has served on several National Research Council panels and on the Carnegie Council on Adolescent Development. He was an invited Fellow at the Center for Advanced Study in the Behavioral Sciences in 1995-96, and he received the Outstanding Achievement in Adolescent Medicine Award in 2005 from the Society for Adolescent Medicine. Jessor is, after 66 years, the longest-serving active faculty member at the University of Colorado. In May 2015, he was awarded the degree of Doctor of Science, honoris causa, by the Regents of the University of Colorado.