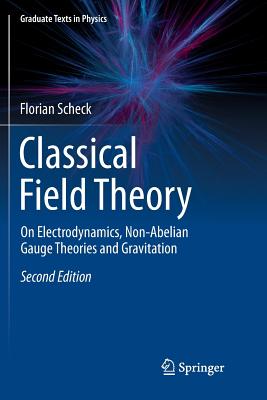 Scheck's successful textbook presents a comprehensive treatment, ideally suited for a one-semester course. The textbook describes Maxwell's equations first in their integral, directly testable form, then moves on to their local formulation. The first two chapters cover all essential properties of Maxwell's equations, including their symmetries and their covariance in a modern notation. Chapter 3 is devoted to Maxwell's theory as a classical field theory and to solutions of the wave equation. Chapter 4 deals with important applications of Maxwell's theory. It includes topical subjects such as metamaterials with negative refraction index and solutions of Helmholtz' equation in paraxial approximation relevant for the description of laser beams.
Chapter 5 describes non-Abelian gauge theories from a classical, geometric point of view, in analogy to Maxwell's theory as a prototype, and culminates in an application to the U(2) theory relevant for electroweak interactions. The last chapter 6 gives a concise summary of semi-Riemannian geometry as the framework for the classical field theory of gravitation. The chapter concludes with a discussion of the Schwarzschild solution of Einstein's equations and the classical tests of general relativity.
The new concept of this edition presents the content divided into two tracks: the fast track for master's students, providing the essentials, and the intensive track for all wanting to get in depth knowledge of the field.
Cleary labeled material and sections guide students through the preferred level of treatment. Numerous problems and worked examples will provide successful access to Classical Field Theory.