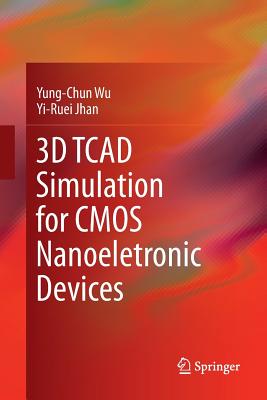 This book demonstrates how to use the Synopsys Sentaurus TCAD 2014 version for the design and simulation of 3D CMOS (complementary metal-oxide-semiconductor) semiconductor nanoelectronic devices, while also providing selected source codes (Technology Computer-Aided Design, TCAD). Instead of the built-in examples of Sentaurus TCAD 2014, the practical cases presented here, based on years of teaching and research experience, are used to interpret and analyze simulation results of the physical and electrical properties of designed 3D CMOSFET (metal-oxide-semiconductor field-effect transistor) nanoelectronic devices.

The book can be used for graduate and senior undergraduate students alike, while also offering a reference guide for engineers and experts in the semiconductor industry. Readers are expected to have some preliminary knowledge of the field.

Dr. Yung-Chun Wu received his B.S. degree in Physics from National Central University in 1996, his M.S. degree in Physics from National Taiwan University in 1998, and his Ph.D. from National Chiao Tung University, Taiwan, in 2005. From 1998 to 2002, he was an assistant researcher at National Nano Device Laboratories, Hsinchu, Taiwan, where he was primarily engaged in research on single electron transistor and electron beam lithography technology. In 2006, he joined the Department of Engineering and System Science, National Tsing-Hua University, Hsinchu, Taiwan, where he is currently working as an associate professor. He teaches 3D CMOS semiconductor nanoelectronic devices by TCAD simulation course for seven years. His research interests include nanoelectronic devices and 3D TCAD simulation, flash memory devices, and solar cells. He has published 56 international SCI papers on nanoelectronic devices.