The Psychology of Tolerance: Conception and Development 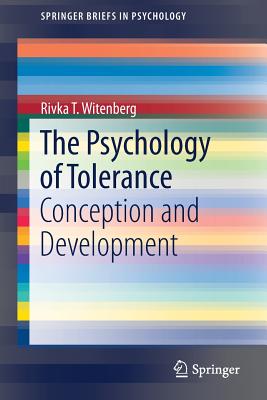 This book offers a new standpoint to understanding tolerance to human diversity by approaching it from the perspectives of cognitive, developmental and prosocial psychology. Emphasising the positive aspects of social perception and behaviour, it invites readers to re-consider 'tolerance' not simply as the opposite of prejudice, but as something that can in fact coexist with prejudice and intolerance. Drawing on original empirical research conducted with children, adolescents and young adults, the book maps the response patterns for tolerant judgement and justification, including psycho-developmental factors. It explains how tolerance regarding differences of colour, creed and culture is based on underlying beliefs that guide the reasoning process to support judgements about human diversity. Showcasing emerging theory and a new methodology of data collection that goes beyond common approaches, this book outlines a unique potential developmental trajectory for tolerance to human diversity based on fairness, empathy and reason. The book challenges students, researchers and general readers across the fields of psychology, human ethics and moral philosophy with its new insights into the character of prosocial beliefs.

Rivka T. Witenberg is a developmental and cognitive psychologist who has lectured in these areas at the University of Melbourne and Australian Catholic University. Her major research interest is in the development and conceptualisation of tolerance to human diversity, an area in which she has gained considerable expertise in the examination of thought processes and underlying beliefs about moral and socio-moral issues. Rivka has developed and presented a series of professional training seminars for the Department of Education and Training in Victoria for teachers based on the findings of her research into tolerance, and contributed to the Victorian State Government's Racial and Religious Tolerance Legislation bill.