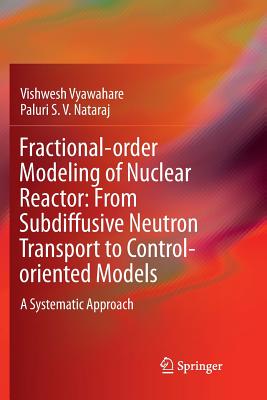 This book addresses the topic of fractional-order modeling of nuclear reactors. Approaching neutron transport in the reactor core as anomalous diffusion, specifically subdiffusion, it starts with the development of fractional-order neutron telegraph equations. Using a systematic approach, the book then examines the development and analysis of various fractional-order models representing nuclear reactor dynamics, ultimately leading to the fractional-order linear and nonlinear control-oriented models. The book utilizes the mathematical tool of fractional calculus, the calculus of derivatives and integrals with arbitrary non-integer orders (real or complex), which has recently been found to provide a more compact and realistic representation to the dynamics of diverse physical systems.

Vishwesh A. Vyawahare is a faculty in the Department of Electronics Engineering at Ramrao Adik Institute of Technology, Nerul, Navi Mumbai, India. He received his Master of Engineering degree in Control Systems from the Government College of Engineering, Pune, India in 2004, followed by a PhD in Systems and Control Engineering from the Indian Institute of Technology Bombay, Mumbai, India, in 2012. His doctoral work focused on the fractional-order modeling of nuclear reactors. His current research areas include modeling and control using fractional-order, complex-order and variable-order calculus.

Paluri S. V. Nataraj is a faculty in the Systems and Control Engineering Group at the Indian Institute of Technology Bombay (IIT Bombay), Mumbai, India. He received his PhD in Process Dynamics and Control from the Indian Institute of Technology Madras, Chennai, India in 1987. He subsequently worked at the CAD Centre at IIT Bombay for one and a half years before joining the Systems and Control Engineering Group at IIT Bombay in 1988, where he has been involved in teaching and research for the past 28 years. His current research interests are in the areas of fractional-order modeling and control, global optimization, parallel computing, reliable computing, and robust control.