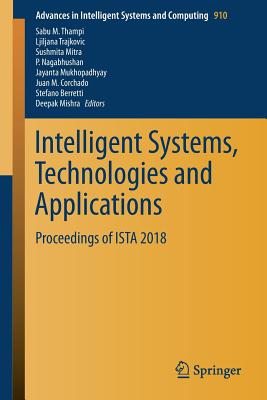 This book explores and discusses various aspects of intelligent systems technologies and their applications. It constitutes the thoroughly refereed post-conference proceedings of the 4th International Symposium on Intelligent Systems Technologies and Applications (ISTA'18), September 19-22, 2018, Bangalore, India. All submissions were evaluated on the basis of their significance, novelty, and technical quality. This book contains 20 papers selected for presentation at the Symposium. The book is chiefly intended for, and offers a valuable resource for, researchers and scientists engaged in various fields involving intelligent systems.

Sabu M. Thampi is a Professor at the Indian Institute of Information Technology and Management-Kerala (IIITM-K), Trivandrum, India. His main research areas are sensor networks, IoT, social networks, and video surveillance. He has authored and edited few books and published papers in academic journals and international proceedings. He has served as a guest editor for special issues in journals and as a program committee member for many conferences. He has co-chaired several workshops and conferences. He has initiated and is also involved in the organisation of several annual conferences. He is a senior member of IEEE and a member of IEEE CS and ACM.

Sushmita Mitra is a full Professor at the Machine Intelligence Unit (MIU), Indian Statistical Institute, Kolkata. She is the author of many books published by reputed publishers. Dr. Mitra has guest edited special issues of several journals, is an Associate Editor of "IEEE/ACM Trans. on Computational Biology and Bioinformatics," "Information Sciences," "Neurocomputing," and is a Founding Associate Editor of "Wiley Interdisciplinary Reviews: Data Mining and Knowledge Discovery." She has more than 75 research publications in referred international journals. Dr. Mitra is a Fellow of the IEEE, and Fellow of the Indian National Academy of Engineering and The National Academy of Sciences. She has served in the capacity of Program Chair, Tutorial Chair, Plenary Speaker, and as member of programme committees of many international conferences. Her current research interests include data mining, pattern recognition, soft computing, image processing, and Bioinformatics.

P. Nagabhushan, Director, Indian Institute of Information Technology, Allahabad is a Professor in Computer Science and Engineering, University of Mysore, Mysore. He has more than three and half decades of teaching experience. He is actively associated with various academic, statutory and professional bodies. He is the member of academic councils and Board of studies of several universities. He has successfully guided 28 numbers of Ph.D.s and has authored more than 500 numbers of Research Papers out of which more than 100 papers are DBLP indexed. The citation index of 1856 with H-index of 21 and i10 index of 53 reflects his academic accomplishments.

Jayanta Mukhopadhyay (Mukherjee) received his Ph.D. degree in Electronics and Electrical Communication Engineering from the Indian Institute of Technology (IIT), Kharagpur. He was a Humboldt Research Fellow at the Technical University of Munich in Germany for one year in 2002. He has published about 250 research papers in journals and conference proceedings in these areas. He received the Young Scientist Award from the Indian National Science Academy in 1992. Dr. Mukherjee is a Senior Member of the IEEE. He is a fellow of the Indian National Academy of Engineering (INAE).

Stefano Berretti is an Associate Professor in the Department of Information Engineering (DINFO) of the University of Firenze, Italy. He received the Laurea degree in Electronics Engineering and the Ph.D. in Informatics Engineering and Telecommunications from the University of Firenze, in 1997 and 2001, respectively. His current research interests are mainly focused on content modeling, retrieval, and indexing of image and 3D object databases. He is the author of more than 100 publications appeared in conference proceedings and international journals in the area of pattern recognition, computer vision and multimedia. He is in the program committee of several international conferences and serves as a frequent reviewer of many international journals. Stefano is the member of GIRPR) affiliated to the IAPR, and member of the IEEE.

Dr. Deepak Mishra pursued his Ph.D. at IIT Kanpur in the Electrical Engineering Department. His Thesis title was "Novel Biologically Inspired Neural Network Models." Later he joined as a postdoc researcher at the University of Louisville, KY, USA in the field of signal processing and system neuroscience. After a brief stint 2009-2010 as a senior software engineer at CMC Limited, Hyderabad, he opted to work as an academic faculty at IIST, Trivandrum in 2010 and continued to work as Associate Professor in the Department of Avionics. He was also awarded Young Scientist Award from System Society of India for his research work in the year 2012. His research interest includes Neural networks and Machine learning, Computer vision and Graphics, Image and Video Processing. He has published research papers both in International and National Journal of repute and presented his research work in various international and national conferences.