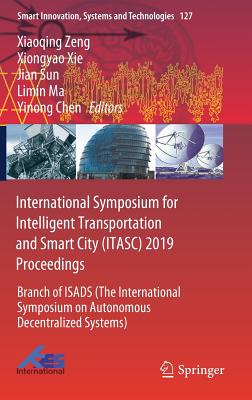 This book presents research advances in intelligent transportation and smart cities in detail, mainly focusing on green traffic and urban utility tunnels, presented at the 4th International Symposium for Intelligent Transportation and Smart City (ITASC) held at Tongji University, Shanghai, on May 8-10, 2019. It discusses a number of hot topics, such as the 2BMW system (Bus, Bike, Metro and Walking), transportation safety and environmental protection, urban utility design and application, as well as the application of BIM (Building Information Modeling) in city design. By connecting the theory and applications of intelligent transportation in smart cities, it enhances traffic efficiency and quality. The book gathers numerous selected papers and lectures, including contributions from respected scholars and the latest engineering advances, to provide guidance to researchers in the field of transportation and urban planning at universities and in related industries.

The first conference in the ITASC series was held in 2013 as a workshop of the International Symposium on Autonomous Decentralized System (ISADS) in Mexico City. The second and third were held in May 2015 and May 2017, respectively, in Tongji University, Shanghai.

Prof. Xiaoqing Zeng is a professor at College of Transportation Engineering, Tongji University, China. She received her Bachelor, Master and Ph.D. degree from Tongji University in 1990, 1992 and 1995, respectively. Her research focuses in the field of transportation information and control engineering. She has published more than 50 papers, received 6 patents, wrote 6 books, one of which was awarded the first prize by Tongji University. Prof. Zeng has rich teaching experience. She teaches 14 undergraduate and graduate courses, such as Rail Transit Control and Management, Traffic Information Systems and Engineering, ATC Technology of Urban Vehicle, etc. Prof. Zeng is also the vice president of Shanghai Creative Studies Institute.

Prof. Xiongyao Xie is a professor at College of Civil Engineering, Tongji University, China and deputy director of Department of Geotechnical Engineering. He received Ph.D. degree in Underground Construction and Engineering at Tongji University, in 2001. His research focuses on NDT, risks and disaster prevention of tunneling and underground engineering. He has published more than 40 papers, received 4 patents, completed nearly 20 research projects, and has been awarded several national prizes in China. Prof. Xie also has rich teaching experience and his course "Underground Structures and Underground Engineering Construction" were awarded the excellent courses prize by Tongji University. Prof. Jian Sun is a professor at the Department of International Shipping, Shanghai Jiao Tong University, China. He received Ph. D. degree in Traffic and Transportation Engineering from University of Florida, 2009. Prof. Sun's research field includes urban driving behavior and environment, urban comprehensive traffic planning and simulation, vehicle networking technology and urban traffic signal self-adaption. He has published nearly 50 papers in the past five years, participated in 20 research projects and had 7 patents.

Prof. Limin Ma is a professor at the School of Environmental Science and Engineering in Tongji University, China. He obtained Ph. D. degree in Biogeochemistry from Institute of Earth Environment, Chinese Academy of Sciences, in 2001. Prof. Ma worked as a postdoc in the College of Environmental Science and Engineering, Tongji University from 2001 to 2003. From 2009 to 2010 he was visiting scholar in Pisa University, Italy. In the past years, his research includes Biogeochemistry, past environmental change, theory and technology of restoration of the degraded ecological ecosystem and degraded environment, control of pesticide pollution, theory and technology of constructed wetland for wastewater ecological treatment. He has published more than 100 scientific papers and been granted 7 patents.

Prof. Yinong Chen is a senior lecturer at School of Computing, Informatics, and Decision Systems Engineering, Arizona State University, USA. He received Ph.D. from the University of Karlsruhe, Germany, in 1993. He did postdoctoral research at Karlsruhe and at LAAS-CNRS in France. From 1994 to 2000, he was a lecturer and then senior lecturer in the School of Computer Science at the University of the Witwatersrand, Johannesburg. Dr. Chen joined Arizona State University in 2001. His expertise includes service-oriented computing, programming languages, dependable computing, robotics, and embedded systems. He (co-) authored six textbooks and more than 120 research papers. He is in editorial boards of several journals, including Journal of Systems and Software and Simulation Modeling Practice and Theory.