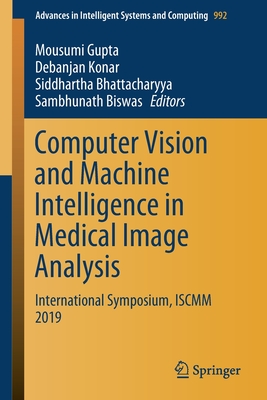 This book includes high-quality papers presented at the Symposium 2019, organised by Sikkim Manipal Institute of Technology (SMIT), in Sikkim from 26-27 February 2019. It discusses common research problems and challenges in medical image analysis, such as deep learning methods. It also discusses how these theories can be applied to a broad range of application areas, including lung and chest x-ray, breast CAD, microscopy and pathology. The studies included mainly focus on the detection of events from biomedical signals.

Mousumi Gupta is Associate Professor in the Department of Computer Applications, Sikkim Manipal Institute of Technology (SMIT). She completed her M.Tech. and Ph.D. from SMIT in 2008 and 2015 respectively. Her areas of research interests are Digital Image Processing and Pattern Recognition. She has published many papers in international journals and conference proceedings. She is reviewer of many international journals and conferences like IET Image processing and Journal for Electronic Imaging.

Debanjan Konar is Assistant Professor in the Department of Computer Applications, Sikkim Manipal Institute of Technology (SMIT). He completed his B.Tech. in Computer Science and Engineering from Burdwan University; M.Tech. in Multimedia and Software Systems from National Institute Of Technical Teachers' Training & Research, Kolkata. Currently, he is pursuing Ph.D. from IIT Delhi in the area of Quantum Inspired Soft Computing. He is reviewer of many journals like Applied soft computing, International Journal of Computers and Applications and International Journal of Hybrid Intelligence. He has been technical program committee member of many IEEE conferences.

Siddhartha Bhattacharyya [FIETE, SMIEEE, SMACM, SMIETI, LMCSI, LMOSI, LMISTE, MIET (UK), MIAENG, MIRSS, MIAASSE, MCSTA, MIDES, MIISIP] did his Bachelors in Physics, Bachelors in Optics and Optoelectronics and Masters in Optics and Optoelectronics from University of Calcutta, India in 1995, 1998 and 2000 respectively. He completed Ph.D. in Computer Science and Engineering from Jadavpur University, India in 2008. He is the recipient of the University Gold Medal from the University of Calcutta for his Masters. He is the recipient of the coveted Adarsh Vidya Saraswati Rashtriya Puraskar in 2016, Distinguished HoD and Distinguished Professor wards conferred by Computer Society of India, Mumbai Chapter, India in 2017 and Bhartiya Shiksha Ratan Award conferred by Economic Growth Foundation, New Delhi in 2017. He received the NACF-SCRA, India award for Best Faculty for Research in 2017. He received Honorary Doctorate Award (D. Litt.) from The University of South America in 2017. He is also the recipient of the South East Asia Regional Computing Confederation (SEARCC) International Digital Award ICT Educator of the Year at Colombo, Sri Lanka in 2017. He is currently the Principal of RCC Institute of Information Technology, Kolkata, India. In addition, he is also serving as the Dean (Research and Development and Academic Affairs) of the institute. He is a co-author of 4 books and the co-editor of 8 books and has more than 170 research publications in international journals and conference proceedings to his credit. He has got a patent on intelligent colorimeter technology.

Sambhunath Biswas obtained an M.Sc. degree in Physics, and a Ph.D. in Radiophysics and Electronics, from the University of Calcutta in 1973 and 2001 respectively. In 1983-85 he completed courses of M.Tech. (Computer Science) from Indian Statistical Institute, Calcutta. His doctoral thesis is on Image Data Compression. He was a UNDP Fellow at MIT, USA to study machine vision in 1988-89 and was exposed to research in the Artificial Intelligence Laboratory. He visited the Australian National University at Canberra in 1995 and joined the school on wavelets theory and its applications. In 2001, he became a representative of the Government of India to visit China for holding talks about collaborative research projects in different Chinese Universities. He started his career in Electrical Industries, in the beginning as a graduate engineering trainee and, then as a design and development engineer. He, at present, is a system analyst, GR-I (in the rank of Professor) at the Machine Intelligence Unit in Indian Statistical Institute, Calcutta where he is engaged in research and teaching. He is also an external examiner of the Department of Computer Science at Jadavpur University in Calcutta. He has published several research articles in International Journals of repute and is a member of IUPRAI (Indian Unit of Pattern Recognition and Artificial Intelligence). He is the principal author of a book titled Bezier and Splines in Image Processing and Machine Vision, published by Springer, London.