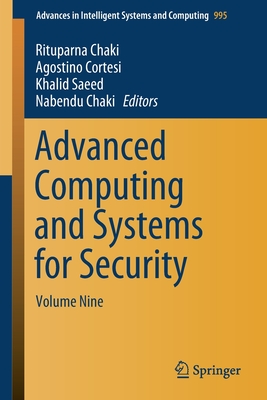 This book features extended versions of selected papers that were presented and discussed at the 6th International Doctoral Symposium on Applied Computation and Security Systems (ACSS 2019) held in Kolkata, India on 12-13 March, 2019. Organized by the Departments of Computer Science & Engineering and A. K. Choudhury School of Information Technology, both from the University of Calcutta, the symposium's international partners were Ca' Foscari University of Venice, Italy and Bialystok University of Technology, Poland. The chapters cover topics such as biometrics, image processing, pattern recognition, algorithms, cloud computing, wireless sensor networks and security systems, reflecting the various symposium sessions.

Rituparna Chaki is Professor of Information Technology in the University of Calcutta, India. She received her Ph.D. Degree from Jadavpur University in India in 2003. Before this she completed B.Tech. and M.Tech. in Computer Science & Engineering from the University of Calcutta in 1995 and 1997 respectively. She has served as a System Executive in the Ministry of Steel, Government of India for nine years, before joining the academics in 2005 as a Reader of Computer Science & Engineering in the West Bengal University of Technology, India. She is with the University of Calcutta since 2013. Her area of research includes Optical networks, Sensor networks, Mobile ad hoc networks, Internet of Things, Data Mining, etc. She has nearly 100 publications to her credit. Dr. Chaki has also served in the program committees of different international conferences. She has been a regular Visiting Professor in the AGH University of Science & Technology, Poland for the last few years. Dr. Chaki has co-authored a couple of books published by CRC Press, USA.

Agostino Cortesi, Ph.D., is a Full Professor of Computer Science at Ca' Foscari University, Venice, Italy. He served as Dean of the Computer Science studies, as Department Chair, and as Vice-Rector for quality assessment and institutional affairs. His main research interests concern programming languages theory, software engineering, and static analysis techniques, with particular emphasis on security applications. He published more than 110 papers in high-level international journals and proceedings of international conferences. His h-index is 16 according to Scopus, and 24 according to Google Scholar. Agostino served several times as member (or chair) of program committees of international conferences (e.g., SAS, VMCAI, CSF, CISIM, ACM SAC) and he is in the editorial boards of the journals "Computer Languages, Systems and Structures" and "Journal of Universal Computer Science". Currently, he holds the chairs of "Software Engineering", "Program Analysis and Verification", "Computer Networks and Information Systems" and "Data Programming".

Khalid Saeed is a Full Professor in the Faculty of Computer Science, Bialystok University of Technology, Bialystok, Poland. He received the B.Sc. Degree in Electrical and Electronics Engineering in 1976 from Baghdad University in 1976, the M.Sc. and Ph.D. Degrees from Wroclaw University of Technology, in Poland in 1978 and 1981, respectively. He received his D.Sc. Degree (Habilitation) in Computer Science from the Polish Academy of Sciences in Warsaw in 2007. He was a Visiting Professor of Computer Science with the Bialystok University of Technology, where he is now working as a Full Professor He was with AGH University of Science and Technology in the years 2008-2014. He is also working as a Professor with the Faculty of Mathematics and Information Sciences at Warsaw University of Technology. His areas of interest are Biometrics, Image Analysis and Processing and Computer Information Systems. He has published more than 220 publications, edited 28 books, Journals and Conference Proceedings, 10 text and reference books. He supervised more than 130 M.Sc. and 16 Ph.D. theses. He gave more than 40 invited lectures and keynotes in different conferences and universities in Europe, China, India, South Korea and Japan on Biometrics, Image Analysis and Processing. He received more than 20 academic awards. Khalid Saeed is a member of more than 20 editorial boards of international journals and conferences. He is an IEEE Senior Member and has been selected as IEEE Distinguished Speaker for 2011-2016. Khalid Saeed is the Editor-in-Chief of International Journal of Biometrics with Inderscience Publishers.

Nabendu Chaki is a Professor in the Department of Computer Science & Engineering, University of Calcutta, Kolkata, India. Dr. Chaki did his first graduation in Physics from the legendary Presidency College in Kolkata and then in Computer Science & Engineering from the University of Calcutta. He has completed Ph.D. in 2000 from Jadavpur University, India. He is sharing 6 international patents including 4 U.S. patents with his students. Prof. Chaki has been quite active in developing international standards for Software Engineering and Cloud Computing as a member of Global Directory (GD) for ISO-IEC. Besides editing more than 25 book volumes, Nabendu has authored 6 text and research books and has more than 150 Scopus Indexed research papers in Journals and International conferences. His areas of research interests include distributed systems, image processing and software engineering. Dr. Chaki has served as a Research Faculty in the Ph.D. program in Software Engineering in U.S. Naval Postgraduate School, Monterey, CA. He is a visiting faculty member for many Universities in India and abroad. Besides being in the editorial board for several international journals, he has also served in the committees of over 50 international conferences. Prof. Chaki is the founder Chair of ACM Professional Chapter in Kolkata.