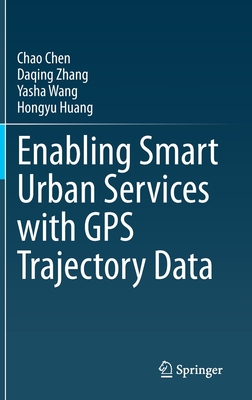 With the proliferation of GPS devices in daily life, trajectory data that records where and when people move is now readily available on a large scale. As one of the most typical representatives, it has now become widely recognized that taxi trajectory data provides rich opportunities to enable promising smart urban services. Yet, a considerable gap still exists between the raw data available, and the extraction of actionable intelligence. This gap poses fundamental challenges on how we can achieve such intelligence. These challenges include inaccuracy issues, large data volumes to process, and sparse GPS data, to name but a few. Moreover, the movements of taxis and the leaving trajectory data are the result of a complex interplay between several parties, including drivers, passengers, travellers, urban planners, etc.

In this book, we present our latest findings on mining taxi GPS trajectory data to enable a number of smart urban services, and to bring us one step closer to the vision of smart mobility. Firstly, we focus on some fundamental issues in trajectory data mining and analytics, including data map-matching, data compression, and data protection. Secondly, driven by the real needs and the most common concerns of each party involved, we formulate each problem mathematically and propose novel data mining or machine learning methods to solve it. Extensive evaluations with real-world datasets are also provided, to demonstrate the effectiveness and efficiency of using trajectory data.

Unlike other books, which deal with people and goods transportation separately, this book also extends smart urban services to goods transportation by introducing the idea of crowdshipping, i.e., recruiting taxis to make package deliveries on the basis of real-time information. Since people and goods are two essential components of smart cities, we feel this extension is bot logical and essential. Lastly, we discuss the most important scientific problems and open issues in mining GPS trajectory data.

Chao Chen is a Full Professor of Computer Science at Chongqing University. He received his Ph.D. in Computer Science from Pierre and Marie Curie University and Institut Mines-Télécom/Télécom SudParis, France in 2014. He has authored or co-authored more than 100 papers including 20 ACM/IEEE Transactions. His research interests include pervasive computing, mobile computing, urban logistics, data mining from large-scale taxi GPS trajectory data, and big data analytics for smart cities. Dr. Chen's work on taxi trajectory data mining was featured by IEEE SPECTRUM in 2011, 2016 and 2020, respectively. He was also the winner of the Best Paper Runner-Up Award at MobiQuitous 2011.

Daqing Zhang is a Chair Professor at Peking University, China. He received his Ph.D. from the University of Rome "La Sapienza" and University of L'Aquila in 1996. He has authored or co-authored more than 180 referred journal and conference papers, particularly on practical applications in digital cities, mobile social networks, and elderly care. His research interests include large-scale data mining, urban computing, context-aware computing, and ambient assistive living. He is a recipient of the 10 Years CoMoRea Impact Paper Award at IEEE PerCom 2013, the Best Paper Award at IEEE UIC 2015/2012, and the Best Paper Runner Up Award at MobiQuitous 2011.

Yasha Wang is a Full Professor and Associate Director of the National Research and Engineering Center of Software Engineering at Peking University, China. He received his Ph.D. from Northeastern University, Shenyang, China, in 2003. He also served as the head of the technical special group of the National Big Data Standards Committee of China, and as a standing committee member of the ubiquitous computing special interest group of CCF. He has long been engaged in research in the fields of data analysis, ubiquitous computing, and urban computing, and has published more than 100 papers in international high-level academic conference proceedings and journals such as IEEE TMC, ACM Ubicomp, IEEE ICDE, ACM CSCW, AAAI, and IJCAI. Cooperating with major smart-city solution providers, the results of his work have been adopted in more than 20 Chinese cities.