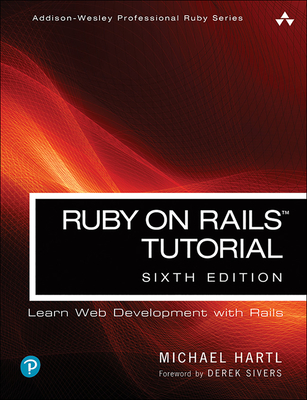 "Ruby on Rails(TM) Tutorial by Michael Hartl has become a must-read for developers learning how to build Rails apps."
--Peter Cooper, Editor of Ruby Inside
Used by sites as varied as Disney, GitHub, Shopify, and Airbnb, Ruby on Rails is one of the most popular frameworks for developing web applications, but it can be challenging to learn and use. Whether you're new to web development or new only to Rails, Ruby on Rails(TM) Tutorial, Sixth Edition, is the solution.

Best-selling author and leading Rails developer Michael Hartl teaches Rails by guiding you through the development of three example applications of increasing sophistication. The tutorial's examples focus on the general principles of web development needed for virtually any kind of website. The updates to this edition include full compatibility with Rails 6.

This indispensable guide provides integrated tutorials not only for Rails, but also for the essential Ruby, HTML, CSS, and SQL skills you need when developing web applications. Hartl explains how each new technique solves a real-world problem, and then he demonstrates it with bite-sized code that's simple enough to understand while still being useful. Whatever your previous web development experience, this book will guide you to true Rails mastery.

This book will help you

Michael Hartl is the creator of the Ruby on Rails Tutorial, one of the leading introductions to web development, and is cofounder and principal author at Learn Enough. Previously, he was a physics instructor at the California Institute of Technology (Caltech), where he received a Lifetime Achievement Award for Excellence in Teaching. He is a graduate of Harvard College, has a Ph.D. in Physics from Caltech, and is an alumnus of the Y Combinator entrepreneur program.