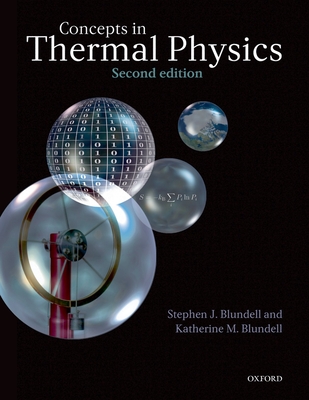 An understanding of thermal physics is crucial to much of modern physics, chemistry and engineering. This book provides a modern introduction to the main principles that are foundational to thermal physics, thermodynamics and statistical mechanics. The key concepts are carefully presented in a clear way, and new ideas are illustrated with copious worked examples as well as a description of the historical background to their discovery. Applications are presented to subjects as diverse as stellar astrophysics, information and communication theory, condensed matter physics and climate change. Each chapter concludes with detailed exercises.

The second edition of this popular textbook maintains the structure and lively style of the first edition but extends its coverage of thermodynamics and statistical mechanics to include several new topics, including osmosis, diffusion problems, Bayes theorem, radiative transfer, the Ising model and Monte Carlo methods. New examples and exercises have been added throughout.

To request a copy of the Solutions Manual, visit: http: //global.oup.com/uk/academic/physics/admin/solutions

Stephen Blundell did his undergraduate degree in Physics and Theoretical Physics at Peterhouse, Cambridge and his Ph. D. in the Cavendish Laboratory at Cambridge. He moved to the Clarendon Laboratory at Oxford to take up an SERC research fellowship, followed by a Junior Research Fellowship at Merton College, where he began research in organic magnets and superconductors using muon-spin rotation. In 1997 he was appointed to a University Lectureship in the Physics Department and a Tutorial Fellowship at Mansfield College, Oxford, and was subsequently promoted to Reader and then Professor. He was a joint winner of the Daiwa-Adrian Prize in 1999 for his work on organic magnets.