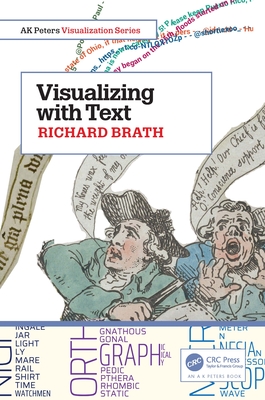 Visualizing with Text uncovers the rich palette of text elements usable in visualizations from simple labels through to documents. Using a multidisciplinary research effort spanning across fields including visualization, typography, and cartography, it builds a solid foundation for the design space of text in visualization. The book illustrates many new kinds of visualizations, including microtext lines, skim formatting, and typographic sets that solve some of the shortcomings of well-known visualization techniques.

Designers, developers, and academics can use this book as a reference and inspiration for new approaches to visualization in any application that uses text.

has been actively involved in the research, design, and development of data visualization and visual analytics since 1990. His research interests include exploration of the boundaries of visualization - such as this book regarding text and visualization - as well as graph visualization, automated insights, 3D, spreadsheets, aesthetics, and machine learning. From a commercial perspective, Richard focuses on the creation of unique, innovative visualizations that are in use by hundreds of thousands of users. Richard originally acquired a degree in architecture and worked in industrial design, special effects, and 3D animation. With the opportunity to solve business challenges with interactive computer graphics, Richard switched to visualization, creating one of the first interactive 3D financial visualizations on the web (1996). Richard is a partner at Uncharted Software, where his team creates a wide variety of visualizations, ranging from small mobile screens to multi-screen video walls. These visualizations are used in domains such as financial markets, professional sports, health care, journalism, and customer analytics. Richard has a personal blog at richardbrath.wordpress.com.