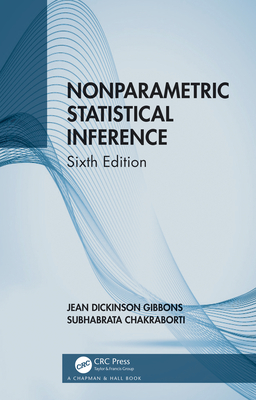 "The fact that the first edition of this book was published in 1971 ... is] testimony to the book's success over a long period."

"... one of the best books available for a theory course on nonparametric statistics. ... very well written and organized ... recommended for teachers and graduate students."

"... There is no competitor for this book and its comprehensive development and application of nonparametric methods. Users of one of the earlier editions should certainly consider upgrading to this new edition." - Technometrics

"... Useful to students and research workers ... a good textbook for a beginning graduate-level course in nonparametric statistics." -

Journal of the American Statistical Association

Since its first publication in 1971, Nonparametric Statistical Inference has been widely regarded as the source for learning about nonparametrics. The Sixth Edition carries on this tradition and incorporates computer solutions based on R.

, has been thoroughly revised and rewritten to make it more readable and reader-friendly. All of the R solutions are new and make this book much more useful for applications in modern times. It has been updated throughout and contains 100 new citations, including some of the most recent, to make it more current and useful for researchers.

Jean Dickinson Gibbons is Russell Professor Emerita of Applied Statistics at the University of Alabama, where she also served as Chair for 20 years. She is a life member of the American Statistical Association, serving three terms on their Board of Directors; she was elected a Fellow in 1972. She earned the B.A. (1958) and M.A. (1959) in mathematics from Duke University and the Ph.D. (1962) in statistics from Virginia Tech, which recently named their graduate program after her. In addition to Alabama, she taught at the Wharton School of the University of Pennsylvania, the University of Cincinnati and Mercer University and offered short courses for the U.S. Army, the Naval Postgraduate School and the American Statistical Association. She currently lives in Vero Beach, Florida, where she is a peer leader in the Fielden Institute for Lifelong Learning at Indian River State College.

Subhabrata Chakraborti is Professor of Statistics and Morrow Faculty Fellow at the University of Alabama. He is a Fellow of the American Statistical Association and an Elected Member of the International Statistical Institute. In 2019, he received the Burnum Distinguished Faculty Award and the SEC Professor of the Year Award at the University of Alabama. Professor Chakraborti has authored or co-authored over one hundred publications. He is the co-author of Nonparametric Statistical Process Control (2019) published by John Wiley. His research interests include applications of statistical methods, including nonparametric methods in industrial statistics and allied areas. Professor Chakraborti has been a Fulbright Scholar and a visiting professor in several countries including South Africa, India and Brazil; he is recognized for his work with students and scholars from around the world. He serves as an Associate Editor of Communications in Statistics and Quality Engineering.