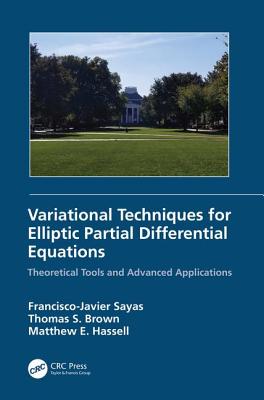 Variational Techniques for Elliptic Partial Differential Equations, intended for graduate students studying applied math, analysis, and/or numerical analysis, provides the necessary tools to understand the structure and solvability of elliptic partial differential equations. Beginning with the necessary definitions and theorems from distribution theory, the book gradually builds the functional analytic framework for studying elliptic PDE using variational formulations. Rather than introducing all of the prerequisites in the first chapters, it is the introduction of new problems which motivates the development of the associated analytical tools. In this way the student who is encountering this material for the first time will be aware of exactly what theory is needed, and for which problems.

Francisco-Javier Sayas is a Professor of Mathematical Sciences at the University of Delaware. He has published over one hundred research articles in refereed journals, and is the author of Retarded Potentials and Time Domain Boundary Integral Equations.

is a lecturer in Computational and Applied Mathematics at Rice University. He received his PhD in Mathematics from the University of Delaware in 2018, under the supervision of Francisco-Javier Sayas. His expertise lies in the theoretical and numerical study of elastic wave propagation in piezoelectric media with applications to control problems.

is a Systems Engineer at Lockheed Martin. He received his PhD in Applied Mathematics from the University of Delaware in 2016, under the supervision of Francisco-Javier Sayas, working on convolution quadrature techniques for problems in wave propagation and scattering by non-homogeneous media as well as viscous flow around obstacles.