A Wrinkle in Time Trilogy 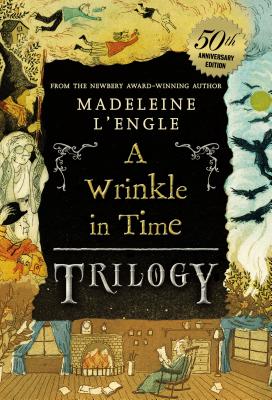 Fifty years ago, Madeleine L'Engle introduced the world to A Wrinkle in Time and the wonderful and unforgettable characters Meg and Charles Wallace Murry, and their friend Calvin O'Keefe. Now their first three adventures are together in one volume.

In the Newbery Award winner A Wrinkle in Time, the children learn that Mr. Murry has been captured by the Dark Thing, and they must time travel to Camazotz to save him. Now a major motion picture

In A Wind in the Door, Meg, Calvin and Mr. Jenkins (their grade school principal) must travel inside C.W. and battle to save Charles's life--as well as the balance of the universe. And in A Swiftly Tilting Planet, Meg's brother Charles Wallace has twenty-four hours to stop the tragedy of nuclear war from occurring. Read the iconic novels that continue to inspire millions of fans around the world. Praise for the A Wrinkle in Time Trilogy: "A Wrinkle in Time is one of my favorite books of all time. I've read it so often, I know it by heart. Meg Murry was my hero growing up. I wanted glasses and braces and my parents to stick me in an attic bedroom. And I so wanted to save Charles Wallace from IT." --Meg Cabot on A Wrinkle in Time "A book that every young person should read, a book that provides a road map for seeking knowledge and compassion even at the worst of times, a book to make the world a better place." --Cory Doctorow on A Wrinkle in Time "A suspenseful, life-and-death drama that is of believable cosmic significance. Complex and rich in mystical religious insights, this is breathtaking entertainment." --School Library Journal, starred review on A Wind in the Door "Madeleine L'Engle mixes classical theology, contemporary family life, and futuristic science fiction to make a completely convincing tale that should put under its spell both readers familiar with the Murrys and those meeting them for the first time." --The New York Times Book Review on A Wind in the Door "An intricately woven fantasy. . . . Theme is L'Engle's greatest forte, and once again she proves this with a compelling plot, rich in style that vibrates with provocative thoughts on universal love, individual caring, and the need for the joy in living." --Booklist, starred review on A Swiftly Tilting Planet Books by Madeleine L'Engle A Wrinkle in Time Quintet
A Wrinkle in Time
A Wind in the Door
A Swiftly Tilting Planet
Many Waters
An Acceptable Time A Wrinkle in Time: The Graphic Novel by Madeleine L'Engle; adapted & illustrated by Hope Larson: A graphic novel adaptation of Madeleine L'Engle's ground-breaking science fiction and fantasy classic. Intergalactic P.S. 3 by Madeleine L'Engle; illustrated by Hope Larson: A standalone story set in the world of A Wrinkle in Time The Austin Family Chronicles
Meet the Austins (Volume 1)
The Moon by Night (Volume 2)
The Young Unicorns (Volume 3)
A Ring of Endless Light (Volume 4) A Newbery Honor book
Troubling a Star (Volume 5) The Polly O'Keefe books
The Arm of the Starfish
Dragons in the Waters
A House Like a Lotus
And Both Were Young Camilla The Joys of Love

MADELEINE L'ENGLE (1918-2007) was the author of many acclaimed books for children and adults. The other books in the Time Quintet include Many Waters and An Acceptable Time.