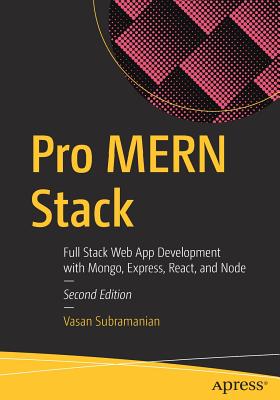 Assemble the complete stack required to build a modern web app using MongoDB, Express, React, and Node. This book also covers many other complementary tools: React Router, GraphQL, React-Bootstrap, Babel, and Webpack. This new edition will use the latest version of React (React 16) and the latest React Router (React Router 4), which has a significantly different approach to routing compared to React Router 2 which was used in the first edition of the book.
Though the primary focus of Pro MERN Stack is to equip you with all that is required to build a full-fledged web application, a large portion of the book will be devoted to React 16. The popular MEAN (MongoDB, Express, AngularJS, Node) stack introduced Single Page Apps (SPAs) and front-end Model-View-Controller (MVC) as new and efficient paradigms.

Facebook's React is a technology that competes indirectly with AngularJS. It is not a full-fledged MVC framework. It is a JavaScript library for building user interfaces (in some sense the View part). Yet, it is possible to build a web app by replacing AngularJS with React - hence the term MERN stack

Who This Book Is For
Developers and architects who have prior experience in any web app stack other than the MERN stack will find the book useful to learn about this modern stack. Prior knowledge of JavaScript, HTML, and CSS is required.

Vasan Subramanian has experienced all kinds of programming, from 8-bit, hand-assembled code on an 8085 to AWS Lambda. He not only loves to solve problems using software, but he also looks for the right mix of technology and processes to make a software product team most efficient. He learned software development at companies such as Corel, Wipro, and Barracuda Networks, not just as a programmer but also as a leader of teams at those companies.

Vasan studied at IIT Madras and IIM Bangalore. In his current job as CTO at Accel, he mentors startups on all things tech. His Twitter handle is @vasansr. While not mentoring or coding (or writing books!), Vasan runs half marathons and plays 5-a-side soccer.