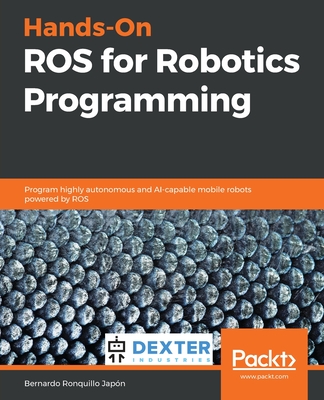 Connecting a physical robot to a robot simulation using the Robot Operating System (ROS) infrastructure is one of the most common challenges faced by ROS engineers. With this book, you'll learn how to simulate a robot in a virtual environment and achieve desired behavior in equivalent real-world scenarios.

This book starts with an introduction to GoPiGo3 and the sensors and actuators with which it is equipped. You'll then work with GoPiGo3's digital twin by creating a 3D model from scratch and running a simulation in ROS using Gazebo. Next, the book will show you how to use GoPiGo3 to build and run an autonomous mobile robot that is aware of its surroundings. Finally, you'll find out how a robot can learn tasks that have not been programmed in the code but are acquired by observing its environment. You'll even cover topics such as deep learning and reinforcement learning.

By the end of this robot programming book, you'll be well-versed with the basics of building specific-purpose applications in robotics and developing highly intelligent autonomous robots from scratch.

Bernardo Ronquillo Japón is an Internet of Things (IoT) and robotics expert who has worked for top technology companies since 1995, including Instituto de Astrofísica de Canarias, Gran Telescopio Canarias, Altran, and Alestis Aerospace. Using his skills and experience, he founded The Robot Academy, where he develops open source hardware and software solutions for engineers and makers: Social Robot IO (2015), for the stimulation of children with autistic spectrum disorder; Robot JUS (2016), which helps engineers get deeper technical insights with the Robot Operating System (ROS) when using low-complexity hardware; and IIoT All-in-One (2018) as an industrial IoT training package for assisting companies in their digital transformation process.