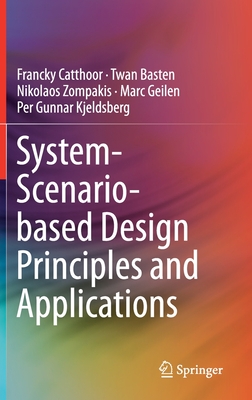 This book introduces a generic and systematic design-time/run-time methodology for handling the dynamic nature of modern embedded systems, without adding large safety margins in the design. The techniques introduced can be utilized on top of most existing static mapping methodologies to deal effectively with dynamism and to increase drastically their efficiency. This methodology is based on the concept of system scenarios, which group system behaviors that are similar from a multi-dimensional cost perspective, such as resource requirements, delay, and energy consumption. Readers will be enabled to design systems capable to adapt to current inputs, improving system quality and/or reducing cost, possibly learning on-the-fly during execution.

Prof. Francky Catthoor is a fellow at the Inter-university Micro-Electronics Center (IMEC), Heverlee, Belgium. He received the engineering degree and a Ph.D. in electrical engineering from the Katholieke Universiteit Leuven, Belgium in 1982 and 1987 respectively. He was assistant professor at the EE department of the KU Leuven since 1989, and has become full professor (part-time) since 2000. His current research activities belong to the field of architecture design methods and system-level exploration for power and memory footprint within real-time constraints, oriented towards data storage management, global data transfer optimization and concurrency exploitation. In 1986 he received the Young Scientist Award from the Marconi International Fellowship Council. He has been an associated editor of IEEE TVLSI, IEEE Transactions on Multi-Media. Since 2002 he is an associate editor of the ACM TODAES and since 1996 an editor for Kluwer's Journal of VLSI Signal Processing. He is also a member of the steering board for the VLSI Technical Committee of the IEEE Circuits & Systems Society and on IEEE Trans. on VLSI Systems steering board. He was the program chair of the 1997 IEEE Intl. Symposium on System Synthesis (ISSS) and the general chair for the 1998 ISSS. He was also the program chair and main organizer of the 2001 IEEE Signal Processing Systems (SIPS) conference. He has been elected an IEEE fellow in 2005.

Nikos Zompakis is a postdoctoral researcher at the National Technical University of Athens.

Marc Geilen is an assistant professor in the Electronic System Group in the department of Electrical Engineering of Eindhoven University of Technology.

Twan Basten is professor of computational models in the Electrical Engineering department of the Eindhoven University of Technology (TU/e). He chairs the Electronic Systems (ES) group and is also a senior research fellow at TNO-ESI. Before starting in the Electrical Engineering department in 1999, he was working at the Computing Science department in the Formal Methods and Information Systems groups at the TU/e. In 2000/2001, he spent some time as a visiting researcher at Philips Research Eindhoven, Information Processing Architectures Group. As a Master's student, he spent one year at the Computer Science Department of the University of Waterloo, Ontario, Canada. Early 2006, he spent three months of sabbatical leave at the Electrical and Computer Engineering (ECE) Department at Carnegie Mellon University (CMU), Pittsburgh, PA, USA, in the System-Level Design group. His current research area is the design of embedded and cyber-physical systems with a focus on networked and multiprocessor systems, trade-off analysis, design-space exploration and computational models.

Per Gunnar Kjeldsberg was born in Trondheim, Norway in 1966. He received his Sivilingeniør degree (MSc) in electrical engineering in 1992 from the Norwegian Institute of Technology (NTH). In 2001 he received the degree of Doktor ingeniør (PhD) from the same institution (now Norwegian University of Science and Technology, NTNU). Between 1992 and 1996 he worked as a design engineer at the company Eidsvoll Electronics AS. Kjeldsberg is currently Professor at Department of Electronics and Telecommunications, NTNU. His research interests are embedded heterogeneous multi-processor systems, with a focus on multi-media and digital signal processing applications.