Issue Voting and Party Competition: The Impact of Cleavage Lines on German Elections Between 1980-1994 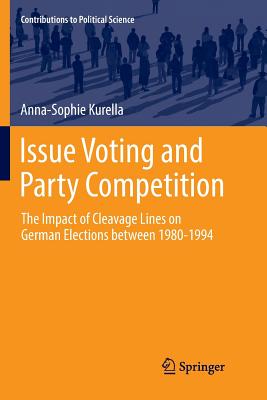 This book examines how social cleavage lines shape issue voting and party competition. Based on a study of German elections between 1980 and 1994, it analyzes whether cleavage group members put more weight on policies that address their personal self-interest than voters who are not affected by the cleavage line. Furthermore, it analyzes the consequences of cleavage groups' deviating patterns of voting behavior for the formal game of party competition. More concretely, the author asks whether equilibrium positions of parties within the policy space are pulled away from the mean due to the more extreme policy demands of cleavage groups in the electorate.

Anna-Sophie Kurella is a researcher at the Mannheim Centre for European Social Research at the University of Mannheim, Germany. In 2016, she successfully completed the PhD program in political science at the Graduate School of Economic and Social Sciences at the University of Mannheim. Her research is focused on party competition, voting behavior and electoral systems.