Merits and Demerits of Political Systems in Dynastic China 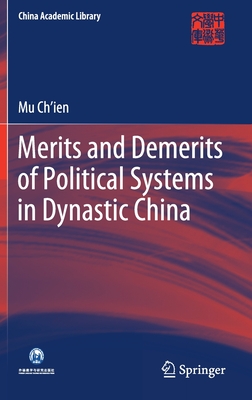 By comparing the political systems in different dynasties, this book illustrates the continuous evolution of traditional Chinese political systems, and evaluates the merits and demerits of the political systems in different dynasties. It also provides detailed records of the evolved government organizations, the names and functions of various offices, the titles and responsibilities of officials. The book consists of five chapters, each of which focuses on one of the five dynasties respectively -- Han, Tang, Song, Ming, and Qing, and a concluding summary. Combining historical facts and anecdotes from history to make the discussion straightforward, interesting, and easy to understand, this is an ideal book for anyone interested in the history of China, particularly its traditional political systems.

Ch'ien Mu (1895-1990) is a well-known Chinese historian, educator, philosopher and Confucian. He was a professor at Yenching University and Peking University among others. He went to Hong Kong in 1949, where he founded the Asia Evening College of Arts and Commerce, later to become the New Asia College. In 1967, he relocated to Taipei, where he taught at the College of Chinese Culture (present-day Chinese Culture University). A member of Academia Sinica, he was also a special researcher for the Taipei Palace Museum. Ch'ien Mu was made an Honorary Doctor of Humane Letters by Yale University in 1960. Ch'ien Mu published very extensively.