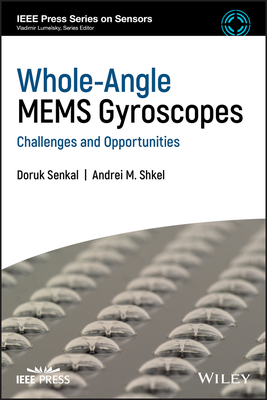 This comprehensive reference covers the technical fundamentals, mathematical framework, and common control strategies for degenerate mode gyroscopes, which are used in high-precision navigation applications. It explores various energy loss mechanisms and the effect of structural imperfections, along with requirements for continuous rate integrating gyroscope operation. It also provides information on the fabrication of MEMS whole-angle gyroscopes and the best methods of sustaining oscillations.

Whole-Angle Gyroscopes is an ideal book for researchers, scientists, engineers, and college/graduate students involved in the technology. It will also be of great benefit to engineers in control systems, MEMS production, electronics, and semi-conductors who work with inertial sensors.

Doruk Senkal, PhD, has been working on the development of Inertial Navigation Technologies for Augmented and Virtual Reality applications at Facebook since 2018. Before joining Facebook, he was developing MEMS Inertial Sensors for mobile devices at TDK Invensense. He received his Ph.D. degree in 2015 from University of California, Irvine, with a focus on MEMS Coriolis Vibratory Gyroscopes. Dr. Senkal 's research interests, represented in over 20 international conference papers, 9 peer-reviewed journal papers, and 16 patent applications, encompass all aspects of MEMS inertial sensor development, including sensor design, device fabrication, algorithms, and control.

Andrei M. Shkel, PhD, has been on faculty at the University of California, Irvine since 2000, and served as a Program Manager in the Microsystems Technology Office of DARPA. His research interests are reflected in over 250 publications, 40 patents, and 2 books. Dr. Shkel has been on a number of editorial boards, including Editor of IEEE/ASME JMEMS and the founding chair of the IEEE Inertial Sensors. He was awarded the Office of the Secretary of Defense Medal for Exceptional Public Service in 2013, and the 2009 IEEE Sensors Council Technical Achievement Award. He is the IEEE Fellow.